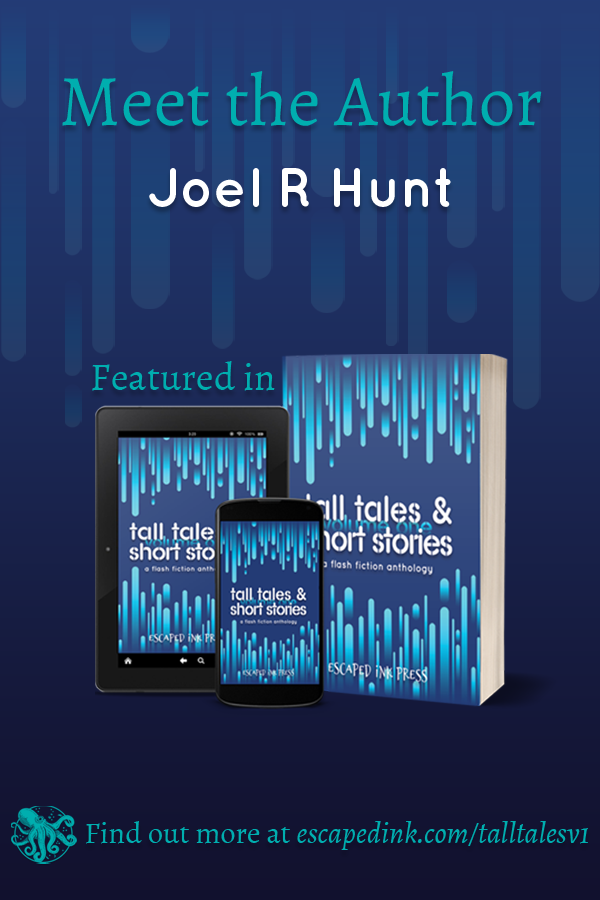 You have two pieces included in Tall Tales & Short Stories Volume One: ‘Eyes for Gold’ and ‘A Cowbot Comes to Town’ — what was your inspiration for those pieces?
I follow the mantra that if you don’t ask, you won’t receive. Since the call for Tall Tales & Short Stories was so open-ended, I went straight to the source and asked on Escaped Ink’s Twitter account what kind of stories they would like to see. The answer: cowboys and pirates!

From there, my inspiration came in finding ways to stay true to the core of those concepts while adding less familiar elements that I could really sink my teeth into. Why write about a regular cowboy when I can write about a robot cowboy? Why stick to a normal pirate when I can have a magic pirate?

For me, the fun of writing is in exploring different worlds, and nothing is better than settling the reader into a world they think they know before catching them off-guard with something utterly unexpected.

Have you ever written a character based on someone you know? Did they find out and what did they think?
I wrote a horror story about what I thought was a generic family. It was only when I started sharing the story afterwards that I realised the family wasn’t generic – it was mine! I’d unintentionally characterised them all with the quirks and habits of the household I grew up in.

Trust me, it’s a little awkward when your mum asks, “Is that supposed to be me?” just before the paragraph where the mother character gets killed off…

Are you a plotter or a pantser when it comes to writing, or somewhere in between?
I am a plotter through and through. I need to know exactly where my plot is going, and how my characters are going to get there, before I can even begin writing. Quite often I start my work on a story by writing the final paragraph, which then provides a target for me to aim for. My process after that is to plot out key moments in the story, and finally weave them all together to make sure it all flows. If I do my job right, the reader should have a hard time guessing which moments I wrote first and which I added to fill in the gaps!

A bit of advice to fellow plotters, though; don’t become a slave to your ending. While I never write without having a good idea of where I’m going, that doesn’t mean I’d always picked the best ending on my first try. If I realise the story or characters are pushing me in a more interesting direction, I let them take me there. Having a plan is great, but being inflexible will just create stilted and lifeless characters.

How do you find the editing process once you’ve finished writing?
Frankly, there isn’t much of one for me. That’s not to say I don’t need to edit my work – I need editing as much as anyone – but I’m such a compulsive planner that I edit continually as I write. I would estimate that when I’m working on a story, 30% of my time is spent writing, and the remaining 70% is spent proof-reading, rewording and polishing.

Do you think someone has to feel emotions strongly or be highly empathic to be a writer?
It might not be absolutely necessary, but it helps! If I’m trying to write something scary, I want it to keep me up at night. If I’m trying to write something touching and emotional, I want it to bring a tear to my eye. I wouldn’t suggest I’m an absolute arbiter of human emotion, but I work on the basis that if I can’t make myself feel an emotion, I’ll have almost no chance of making a stranger feel one.

How many unfinished stories do you have?
Just counting ones I’ve actually started? According to Windows File Explorer, my Unfinished folder contains 226 files. A lot more are abandoned before they get to the page (or screen), but I suppose they don’t count.

Do you believe in writer’s block?
Depends what you mean by “believe in”. I think every writer has times where they just can’t get inspired, and they could stare at a blank page or screen for hours and not get anywhere. However, I don’t believe writer’s block is an on-off switch. It’s more like being tired; yes, it’s a real feeling, and if I wanted to have a comfortable life I could sleep every time I was tired, but I also have to go to work. I can’t stay at home just because I’m feeling tired, and if you want to get anywhere as a writer you can’t stop writing just because you’ve got a block. Force yourself to get those words out, even if they’re uninspired. Writer’s block is something to push through, not something to give up over.

Are there any books that you are currently reading and why?
I’m getting through it slower than I should (especially since I’m only borrowing it), but I thoroughly recommend S. (aka Ship of Theseus). It’s difficult to describe, but to summarise it briefly, it is a story within a story, told in one part through an entire novel by a fictional author, and in another part by two characters who have scribbled in the margins. It’s truly unlike any other book I’ve ever read.

Have you read anything that made you think differently about fiction?
Plenty, and more than I could summarise here! A few in particular come to mind, though. The Bartimaeus books were the first I ever read to break the fourth wall with in-character footnotes (an element I would continue to appreciate through The Third Policeman and then S. as mentioned above). The Color Purple was the first book I read to be written entirely in a non-standard dialect, turning on its head the idea that a story needs to be traditionally accurate in order to be “well-written”. Then there’s The Arrival, a graphic novel which tells a moving and engaging tale about a refugee fleeing to a fantastical and whimsical land, all without using a single word. If you’re a writer who wants to push your craft to new horizons and really test what is possible within fiction, I recommend you check out all of these works.

‘Eyes for Gold’ and ‘A Cowbot Comes to Town’ by Joel R Hunt feature in Tall Tales & Short Stories Volume One.

Joel is a writer, proofreader and ex-teacher from the Midlands of the UK. He writes to fill the ever-present void in his soul. And also, because it’s pretty fun.WebsiteTwitter

Scroll back to top